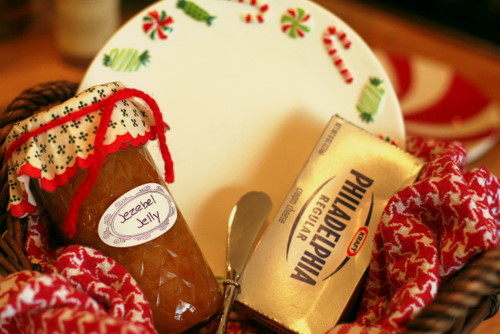 When I started to think about recipes to share for the holiday season, I had a sudden, overwhelming memory of Jezebel Jelly. I would never have put it on my list of stand-out memories, but it popped into my mind quicker than lightening and that I could not ignore.

Jezebel Jelly is a quickly made tangy condiment that seemed to have a real heyday when I was a kid.  At every Christmas function someone, who had been asked to bring an appetizer, would sail into the kitchen in her party dress and clacky high-heel shoes with her most festive Christmas plate and spreading knife, sometimes all tucked away in a basket with a colorful napkin.  Talking a mile a minute undoubtedly, she’d pull out her plate, unwrap a block of cream cheese, plop it down – just the block, as is.  Out came the jar of Jezebel Jelly, with its hand-written label and little fabric cap tied with a gold stretchy cord., and it was poured over the cream cheese and served with crackers (frequently Triscuits, if I remember correctly).  That was that.  Jezebel Jelly was the refuge of the non-cook.  It was, I believe, a popular gift, easy for even the most kitchen-phobic to stir up and prettily package, with the appearance of being homemade without the work.  Eventually, the Jezebel and cream cheese appetizer was replaced by the even-less-work block of cream cheese smothered in Pickapeppa sauce from the bottle. Call that a bonus recipe.

There are lots of people who seem to want to trace the origins of Jezebel Jelly, or Jezebel Sauce as some call it, and figure out why this spicy spread was named after a biblical woman of ill repute.  I don’t know.  Frankly, it always speaks to me more of 1938 movie Jezebel, in which Bette Davis plays a fickle Southern belle whose wily ways hoist her on her own petard in the end.  It is said that Bette was denied the role of Scarlett O’Hara, and this was her chance at Southern belle stardom.  Personally, I think Bette’s sassy, strong willed Julie is a better performance and a richer character.

At a party not too long ago, where all the ladies brought some sort of pick-up food for the buffet, one contribution stood out.  A lovely pottery dish with a cheesy, bubbling spread, full of flavor and punch.  Everyone tracked down the person who brought this and begged the recipe.  To our surprise, she told us it was “just that Jezebel Jelly.”  She’d prepared it the way her mother had for parties by whipping the cream cheese with a little cream, spreading it in the dish, pouring the jelly over it and heating it until bubbly.  She served it with baguette slices and it was a huge hit.  Most of the people in that room had not had Jezebel Jelly in ages and we were all delightfully surprised, and reminded that things become classics for a reason.  Her presentation, I must say, was much more elegant than the sauced block version.

So all these memories made me want to share Jezebel Jelly again.  Jezebel Jelly has a real kick to it, so it goes well with creamy cheeses. Try it poured over a block of cream cheese if you want, or in the hot dish version. It goes well over a baked brie. It makes a great spread on a turkey or ham sandwich, and is an excellent accompaniment to pork.  Use it as a glaze for a pork loin or a sauce for pork chops.  And it is wonderful with that other classic Southern party tradition, a great silver platter of sliced, roasted pork tenderloin or a joint of country ham served with bite-sized biscuits or rolls.  Jezebel Jelly in a silver bowl alongside will be a real treat, and probably bring back some happy memories.

And for the record, the nice little bonnet and tie on the jar in the photo are from, let’s say, a vintage set found at the very, very back of a drawer in my mom’s kitchen, from the days when she gave jarred gifts.  I do like to be authentic. 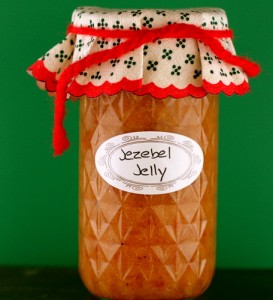 My version is adapted from several recipe cards I found tucked in a drawer.  I think they came from my mother, but they are not in her handwriting. Traditions do pass around.

In a medium bowl, mix the apricot jelly and pineapple preserve until smooth and combined.  I like to use a hand mixer, but you can stir vigorously with a spoon.  Blend in the horseradish until combined, then sift in the mustard powder and mix to combine.  I really recommend sifting the mustard.  This jelly has got enough kick without a lump of mustard powder in one bite.  Grind in lots of black pepper and stir to combine.

Leave the jelly in the bowl for an hour or so to blend the flavors, the scoop into airtight jars or containers and refrigerate.  The jelly will last for a month.