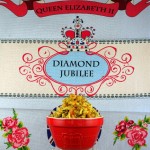 This weekend, Queen Elizabeth II celebrates her Diamond Jubilee – sixty years on the throne.  When she was crowned (she became Queen when her father died in 1952, but the coronation was June 5, 1953),  Britain was still recovering from the wartime devastation, and rationing was still in effect for many foods.  But it was, of course, necessary to create and elegant meal to serve … END_OF_DOCUMENT_TOKEN_TO_BE_REPLACED