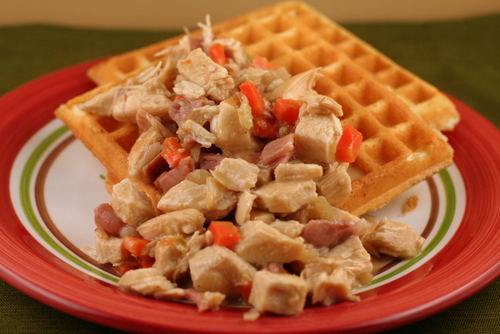 This is, I suppose, a treasured family recipe.  For my entire life, both my mother and my aunt often waxed poetic about the favored meal of their childhood.  Waffles and Hash.  We were regaled at family meals about the tradition of having Waffles and Hash for Sunday night dinner.  Any mention of family food traditions with these two always includes waffles and hash dinners.  But in all my years, neither my mother nor may aunt have ever made waffles and hash.  We would sit around my grandmother’s table on Sunday nights during our visits, eating whatever lovely meal was prepared, and the conversation would turn to memories of waffles and hash.  There is some tangible evidence to the truth of these tales, though.  My great-grandmother submitted a waffle recipe to a local community cookbook.  My mother submitted the same recipe to a cookbook many years later.  They are known as Perre’s Waffles (we all share the same name). The waffle iron I still use today was a housewarming gift from my great-grandmother to my mother when she moved into her first apartment.  I have absolutely no recollection of my mother ever making waffles.  Much less hash.

So I finally decided to take on the dish myself.  I know (and have been told) that it is not like the hash from my mother’s childhood.  But she can’t really describe that hash except that involved chicken, so I was flying blind. My aunt and I sorted through my grandmother’s recipe notes and clippings a few years ago, and found a faded piece of legal paper with a hash recipe on it.  I thought I had found gold, but my aunt immediately read it and dismissed it as” not the hash we used to have at all.”

I include salty country ham in my version, because chances are, at those Middle Tennessee family dinners, we were probably eating a country ham. I love the slight sweetness added by the apple cider with that salty hit.  The waffles cook up crisp on the outside, but airy and tender on the inside.

My mother includes the absolute proviso that there must be lots of gravy, because the whole point is that the gravy from the hash soaks into the waffles. So let the gravy thicken, but not reduce too much.  If you want to, add a bit more cider, and definitely add more if you re-heat the hash.  The family legend also states that this meal included a waffle with hash for dinner, and a waffle with ice cream and maple syrup for dessert.

salt and pepper to taste

Place the chicken breasts in one layer a baking dish and pour over 2 cups of the cider.  Place in the oven and bake until cooked through, about 15 – 20 minutes.  Remove the chicken to a plate and discard the cider.  When cool enough to handle, chop the chicken into bite-sized pieces and set aside.

While the chicken is cooking, finely chop the carrot, celery and onion (I pulse this in the food processor).  Pour the oil in a large saucepan and add the vegetables.  Cook over medium heat until the vegetables are soft. Chop the garlic and add to the vegetables, cooking one more minute.

Add the butter and stir until melted.  Sprinkle over the flour and stir to coat.  Pour in the reamaing 2 cups of cider and the cream and stir until slightly thickened.  Add the nutmeg.  Stir in the shredded chicken and the country ham to coat thoroughly.  Season generously with salt and pepper.

Pour the hash into a baking dish.  Cover and refrigerate until ready to serve (up to one day).  When ready to serve, heat in the oven at 350 degrees until warmed through.

Melt the butter and set aside to cool.  Separate the eggs, placing the whites in the bowl of an electric mixer.

Stir the yolks together with the milk. Mix the dry ingredients in a large bowl.  Stir in the milk mixture.  Pour in the melted butter and stir to combine.

Beat the egg whites until stiff peaks form, then fold into the waffle mixture.

Grease a waffle iron, heat and prepare the waffles according to manufacturers’ instructions.  The size of the waffle iron will determine how much mixture to use in each batch.

Place the cooked waffles on  rack set over a cookie sheet and place in a low oven to keep warm until serving.

Serve the waffles with the hash spooned over.