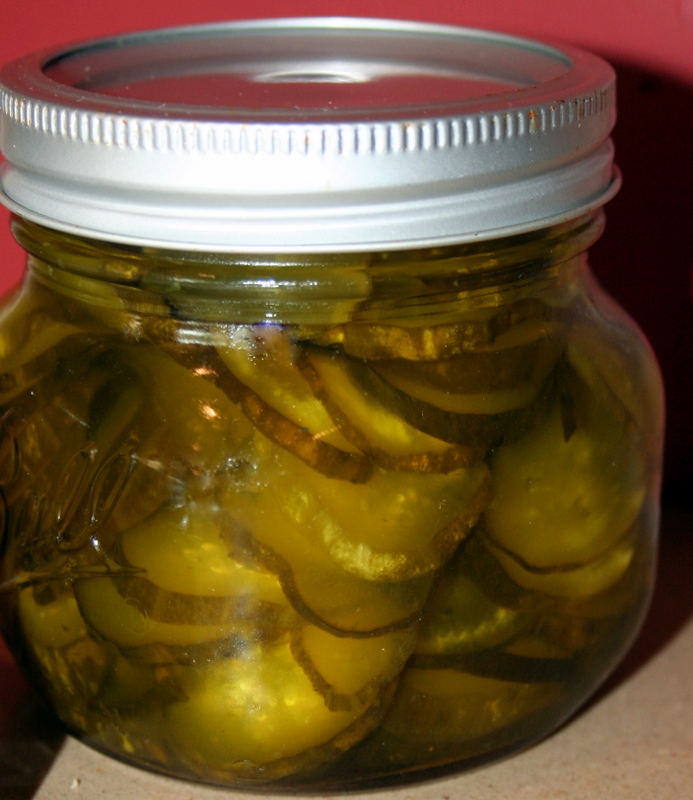 My father calls my house a kitchen with a bedroom.  He’s basically right.  I spent over six months renovating to have the big kitchen of my dreams.  I even planted a small garden, though I have a black thumb and a streak of laziness.

I recall that first summer in my new kitchen as my “prairie house wife days.” Oddly, I had this idea in my head that I was someone who “put things by”.  Making jams and pickles and preserves and having a whole shelf in my new pantry full of glowing little jars of homemade treats, whipping out fresh dill pickles (cucumbers, I had hoped, from my own garden) for hamburger diners, spreading biscuits with my own preserves.  I attempted to grow the ingredients myself (a failure except for herbs, at which I am kind of a whiz).  I made regular visits to the farmer’s market and some roadside stands.  I read every classic community cookbook from my grandmother’s collection, many from the 30s and 40s.  I studied the Ball Guide to Canning and Preserving.  I looked up guidelines from the agricultural extension service online.  I bought cases of jars, a jar lifter, funnel, a big canning pot and went to work.

Pickles.  I somehow arrived at the conclusion that pickles are the ultimate canning project.  So I purchased just the right cucumbers.  I faithfully followed the recipes and rules from the Ball Guide, step-by-step, ingredient-by ingredient.  I sliced, I boiled, I mixed, I canned, I sealed, I hot water-bathed.  Finally, a cool shelf in my pantry was stocked with Mason jars full of bright green, gleaming testaments to my hard work, just waiting for their unveiling at the appointed time.  Everyday, I admired my handiwork, so pleased with my industriousness.  And then the time came.  According to my guide book, the pickles were sufficiently pickled for eating.  I proudly presented a jar to my father, a noted pickle-lover, waiting for his verdict.

After an appropriate interval of several days, my father reluctantly issued his opinion.  Not very good.  He was polite and sweet and politic, but as honest as a parent should be.  My pickles were not very good.  Not the right texture, not very much flavor.  Obviously, I was disappointed.  “But Daddy, I did everything right, just like the recipe.  Can they really be that bad.”  Yes, they were.  And then he asked me: “PC, do you even like pickles?”

Hmmm.  I had to admit to myself, and of course to him, that no, I don’t particularly like pickles.  This is not something that occurred to me before I embarked on this mission.  Why, I will never know.  I had spent hours and dollars fulfilling this nonsensical image of myself as a prairie house wife (I live no where near a prairie by the way), “putting things by.” The failed pickles were disposed of, the jars washed and used to hold flowers, the pantry shelf eventually filled with canned goods.  My prairie housewife days were over.

Some years later, one friend complemented another on the great pickles she’d made.  I immediately jumped on her. “How do you make pickles? I’ve always wanted to do that but failed miserably!!”  My generous friend explained that she just used her grandmother’s old method that’s in tons of old-fashioned community cookbooks.  It uses already made commercial pickles and they are stored in the fridge.  I had to try, and with a little research, her vague guidelines and a lot of faith, I came up with my own super-simple version.  My Dad loves them; they are a hit with all my friends.  Hey, I even like them.  So as I enjoy a new summer in my house, having seven years later completed a patio renovation complete with super-grill and outdoor dining room.  I am ready to grill up some burgers, served with a bowl of homemade pickles on the side.

This recipe starts with a gallon jar of pickles, which divides up into many smaller jars (4 quarts, or a combination of smaller sizes.)  I start the summer with a gallon jar, because the cleaned and dishwashered pickle jar is absolutely the best vessel for mixing iced tea.  You can also use a quart jar of pickles, which will make three pint jars, and adjust the sugar accordingly.

Pour the pickles in a large colander and drain of all the liquid.  Rinse out the jar, but do not clean with soap and water.  Slice the pickles into ¼ inch pieces.  I find doing this by hand the best method, though it takes some time.  The pickles are a bit too soft for a mandoline or food processor.

Layer the sliced pickles with the garlic cloves and sugar and a few good shakes of hot sauce, covering each layer of pickles with sugar.  Top up the jar with sugar as close to the top as you can.  Screw on the lid and set aside in a cool place away from direct light.  The sugar will dissolve and make a syrup in the jar.  Over the next few days, carefully shake the jar to dissolve any sugar that accumulates at the bottom, and add more sugar.  Continue to do this for four or five days, until the syrup covers the pickles and you can’t add anymore.  You may not use the whole 4 pound bag of sugar.

When the pickles are covered in syrup, pour the whole contents of the jar into a large bowl.  Discard the garlic cloves. Using a slotted spoon, transfer the pickle slices to very clean Mason jars, pressing down lightly and shaking to distribute the slices evenly. Fill the jars with pickle slices just to the rim under the screw-on threads.  When all your jars are full, evenly divide the syrup over each jar of pickles.  It may not completely cover the pickles, but that’s okay.  Place the lids on the jars, screw on the bands and refrigerate.  Store in the fridge up to six months unopened, two weeks after they have been opened.