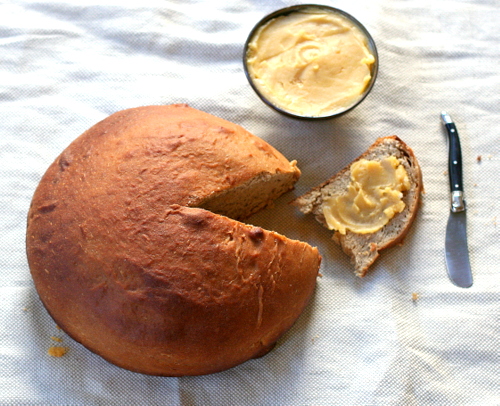 I adapted this recipe from an old community cookbook, modernizing and stream lining it a bit, but I can’t imagine its origins.  Maybe Scandinavian? Or a take on a French quatre epices? A Byzantine tradition?  I don’t know, but the unusual spice combination lightly sweetened with honey really sets this bread apart.   I want there to be some story that this is symbolic of the Three Kings riding in from the East, with the whiff of exotic spices.  Though that is just my fanciful imagining, there is something mysterious about the flavor of this alluring loaf.

I love this bread warm with honey butter, on a cold morning, with a cup of warm tea or hot chocolate. But it is also rather intriguing beside a bowl of creamy soup.  The honey butter, of course, has more uses than I can list here.

Place the warm water in the large bowl of a stand mixer and sprinkle over the yeast.  Leave to become foamy and bubbling.

Pour the milk into a 2 cup glass measuring jug or small bowl and add 6 Tablespoons of the butter cut into pieces.  Microwave in 20 second bursts until the milk is just warm and the butter is melted.  Stir well.

When the yeast has foamed up, add the honey, milk mixture, spices and salt to the yeast in the bowl.  Beat with the paddle attachment on low speed until everything is just blended.  Add the flour slowly, scraping down the sides of the bowl as needed.  When you have added 2 cups of flour, beat in the egg, then continue adding the flour until you have a shaggy ball of dough, most of which clings to the paddle in a ball, but all of which you can easily scoop into a ball.

Butter a large bowl well, scoop the dough into a ball and transfer to the bowl.  Turn the dough ball around in the bowl so it is buttered on all sides.  Cover the bowl with a towel and place in  a warm place to rise for about an hour, until doubled in size.

Punch down the dough and knead it 3 – 4 times, then place in a well butttered 9-inch round casserole dish.  Cover and let rise for another hour.

Preheat the oven to 350°. Bake for 1 hour or until golden, firm and it makes a hollow sound when you knock on it.  You can tent the loaf lightly with foil if it starts gets darker than you prefer.

Melt the remaining butter (after using some to grease the bowl and the casserole) and brush over the top of the hot bread. Cover with a tea towel and cool in the pan (covering the bread keeps the crust soft).

Beat the butter in a stand mixer with the paddle attachment to smooth it out.  Add the honey and vanilla and beat on high speed, scraping the sides of the bowl a couple of times, until the butter is light and fluffy.  Scoop into a bowl, cover and refrigerate.