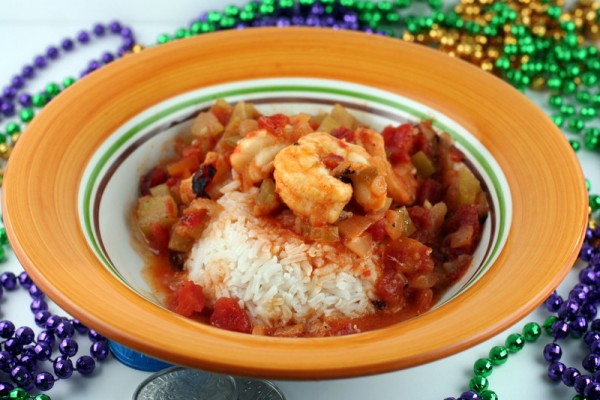 I am surrounded by good Louisiana cooks.  My brother went to college in New Orleans, my close friend went to law school there, and many of their friends from the area have migrated up to Memphis. And they love to cook up a good bayou feast.  So in all honesty, I don’t cook much Cajun or Creole food – I leave it to the experts.

My brother makes a mean gumbo, so I pretty much let him be in charge of that process.  For my birthday last year, I was surprised with a homemade dinner party of grilled boudin, crawfish ettouffe and Doberge cake.  I frequently get a call that one or other of the Louisiana natives has been back home and brought back a cooler of crawfish or gulf shrimp or other local seafood, so they are whipping up a party.  When my brother visits Louisiana, he comes back with Natchitoches meat pies and crawfish pies.  All of this is to say, I get plenty of good Nawlins’ food – from other folks.

But I felt I ought to have a least one good Creole recipe in my back pocket.  And the quickie Monday red beans and rice I make for my self only just doesn’t count.  So asked one of my friends, who is a native of Monroe, Louisiana, for a good recipe.  And just like a man, he gave me a set of instructions, as if I wanted to build a set of bookshelves, more than a recipe.  But God love him, he had the right idea, and a solid foundation.  With a little work, I transformed his manual into a recipe that has become a favorite of mine when I need a little Louisiana fix. This Shrimp Creole has all the classic flavors of the bayou without having to master the art of making a good roux.

Wild American shrimp is by far the best choice for this Louisiana dish and is available fresh or frozen.  For extra-authenticity, look for Tony Chachere’s Creole seasoning.

Stir the rice into the water in a large saucepan with a tight-fitting lid.  Bring to a boil and boil until almost all the water is absorbed and little air bubbles form in the rice, about 10 – 12 minutes, stirring a few times to prevent sticking.  Remove from the heat and tightly cover the pan.

While the rice is cooking, finely dice the celery, green bell pepper, onion and green onion. Mince the garlic.  In a large Dutch oven (4 to 5 quarts), melt the butter over medium high heat.  Drop in the “trinity” – the celery, pepper and onions.  Cook, stirring frequently, until all the vegetables are soft and the onion and celery are translucent, about 12 minutes.  Stir in the garlic and green onions and cook a further 3 minutes.  Sprinkle in the Creole seasoning and stir.  Cook a further minute until fragrant.  Pour in the crushed tomatoes, diced tomatoes and chicken broth, stirring to combine.  Bring to a full rolling boil.  Cook until the sauce has thickened slightly, about 10 minutes. Drop in the shrimp, cover the pan and cook for 5 minutes.  Remove from the heat and leave covered for at least 10 minutes to fully cook the shrimp.

Fluff the rice with a fork and serve it in bowls with the Shrimp Creole ladled over the top.

The Shrimp Creole can be made up to one day ahead and keep tightly covered in the fridge.  Gently reheat over low heat before serving over rice.