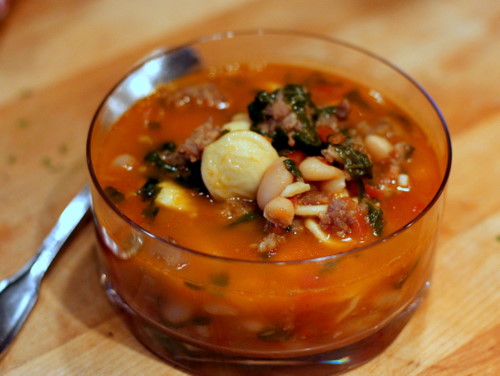 I was once invited to bring a soup to a soup potluck and I readily agreed, because I love soup and getting together with friends to eat soup is a great idea.  But I forgot that I had agreed to it, until the hostess called a day before to ask what soup I was bringing.  For reasons I cannot fathom, I blurted out “Italian Sausage and White Bean.”  I had no recipe for such a soup; had never made one before.  But there you go, I was stuck.  I had eaten a version of this somewhere, but was left to my own devices in making a batch.  But it turned out great, really great.  Surprisingly packed with flavor considering the simple ingredient list.  It was a big hit at the soup night, very different from the other offerings, plus I think it impressed people that I heated it up and added the pasta at the last minute, then shaved parmesan over each bowl and served some fingers of fresh, warm focaccia.

This is a hearty, comforting soup, perfect for chilly fall nights.  You can make it ahead before adding the pasta, then reheat it and drop in the pasta just before serving.  Adding the orecchiette at the end keeps the pasta from getting too soggy and the broth from thickening and soaking into the pasta. Orecchiette translates to little ears, and its little bowl-like shape makes it great for soup, as it will hold some of the tasty broth. If you can’t find orecchiette, use a nice pasta like farfalle or bowties.

Buy a bunch of regular spinach for this soup. I know you are thinking that a bag of baby spinach is easier but baby spinach is more difficult to cut into the nice shreds you want.  Big pieces of spinach are unappealing and hard to eat.

I have never needed to add salt to this soup, so taste it at the very end before you add any seasoning.

1 (28-ounce) can diced tomatoes with juice

Pour the olive oil in a large Dutch oven and add the sausage.  Brown the meat, breaking it up into bite-sized pieces, until it has good golden color all over and is no longer pink. Remember this is soup and will be eaten with a spoon, so you want the pieces the right size.  Add the onion and garlic and cook, stirring frequently, until the onions are soft and translucent, about 10 minutes.  Drain any accumulated fat. I prefer to dump everything into a colander and shake it a bit.  Draining as much fat as possible keeps the finished soup from being greasy.

Pour in the broth and tomatoes with their juice and bring to a boil.

Meanwhile, cut the spinach leaves into a nice chiffonade.  To do this, stack up some leaves, cut them in half along the stem, roll them like a cigar, then slice into small strips.

When the soup is boiling, drop in the drained beans and stir.  Remove from the heat, add the spinach and cover.  Leave for 10 minutes.  At this point, the soup will keep for up to a day in the fridge.

When ready to serve, bring the soup to a boil, drop in the orecchiette and stir.  Cover the pot and cook for 10 – 12 minutes until the pasta is cooked.  Serve sprinkled with Parmesan.