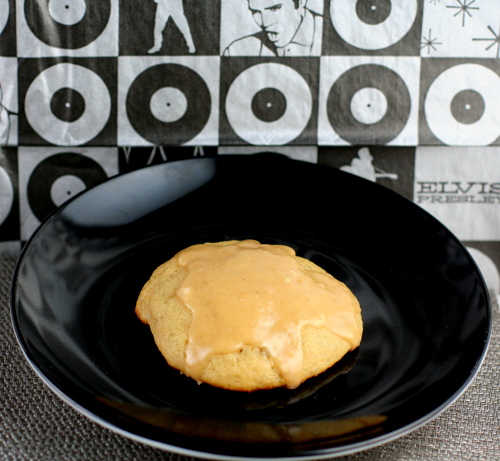 January 8th is Elvis’s birthday.  If you grew up in Memphis, you know that.  For my 25th birthday (quite a few years ago, and not in January), I had a big party.  At Graceland.  The party was in the large lobby of the ticket pavilion, decorated (by Graceland) in pink, black and turquoise balloons.  We ate barbecue and danced to an amazing retro band called The Bouffants.  It was one of my favorite birthdays.  But the real bonus of a party at Graceland was a private, nighttime tour of the house.  Back then, they had just introduced the audio headset guide.  That was a real disappointment to me, because the personality of the Graceland guides had always been such a big part of the tour.  But that disappointment was very much balanced, because we toured the kitchen, which was opening to the public the following week.

The kitchen at Graceland, like most rooms at Graceland, is an absolute model of everything new and chic in the 70s.  It’s not a huge room, very much a standard family house kitchen.  It has dark wood cabinets and harvest gold appliances, with burgundy and avocado green accents.  But Elvis was a modern man, and there is on display one of the earliest microwaves.  It is bigger than the wall oven.  Elvis had a cook for many years who prepared him whatever he wanted, whenever he wanted it, as Elvis kept irregular hours.  He was a country boy and liked county food, and a lot of it, biscuits and gravy, greens, and pork chops and mashed potatoes.  He liked each element of his meal on a separate plate.  These are the things you learn at Graceland.

Elvis did enjoy a peanut butter and banana sandwich occasionally, but was a real fan of banana pudding.  I think the peanut butter and banana connection is a sort of urban myth that has grown and grown in the years since his death.  It is held out as an example of his “peculiar” eating habits, which weren’t all that peculiar, just old-fashioned, Southern and copious. The eating habits of man who didn’t have enough to eat when he was a child. People laugh about the PB&B, but actually enjoy the flavor – and choose to eat the sandwiches on their own.  And man, is it a good combo for a cookie! It is not peculiar, it’s just part of the legend of Elvis.

These are a soft, cakey cookie with a light peanut butter glaze.

In the bowl of a stand mixer, cream the butter and brown sugar until fluffy.  Add eggs and mashed banana and beat until smooth, scraping down the sides of the bowl a few times.  Add the vanilla and blend thoroughly.

Sift together flour, baking powder, baking soda and salt. With the mixer on low, slowly add to the wet ingredients, scraping the bowl occasionally, until everything is well incorporated.  Refrigerate the dough for about 15 minutes.

Drop dough by rounded tablespoons (I use a cookie scoop), 2 inches apart onto the lined sheets. Bake for 8 – 10 minutes until puffed golden and firm. Remove to wire racks to cool.

Place some waxed paper under the cooling racks to catch drips from the glaze.

In a small bowl, using a sturdy whisk or hand mixer, beat together the peanut butter and one Tablespoon of milk until smooth.  Sift in the powdered sugar and mix well.  Drizzle in more milk, ½ Tablespoon at a time until you reach a consistency that will drizzle from a spoon over the cookies.  I consider this medium-thick.

Drizzle the glaze over the cookies and leave to set.

I like a light glaze on these cookies, so the banana flavor shines with just a little hint of peanut butter.  If you prefer a completely frosted cookie, double the glaze recipe and use just enough milk to make it spreadable.