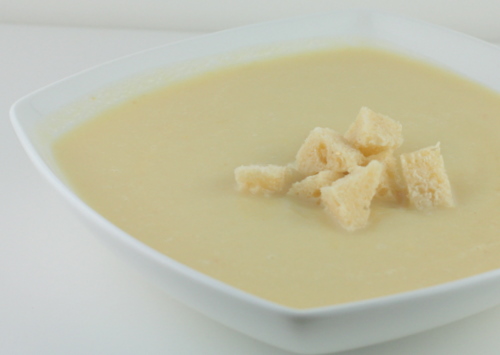 It has already snowed here in Memphis twice this year, but too early and too inconvenient.  I am hoping for a few more snow days, when I have no need to leave the house and am prepared with a good book, with enough warning for a trip to the grocery.  It doesn’t get cold enough, often enough here to invest in big, heavy wool turtleneck sweaters and thick mittens, but I like to imagine myself in one of those photo spreads, wrapped in a pretty scarf and a sweater, logs burning in the background, laughing over a steaming bowl of warming soup.  This would be the soup in that picture.

Bracing is how I would describe this soup. Perfect after a chilly day outdoors or a warm night by the fire.  Underrated  parsnips have a unique bite and lovely fragrance, the fennel is bright and the leeks add a rich undertone.  The pureed soup is silky and rich. I love the creamy color of this soup, that’s why I gave it a slightly silly name.  It is great on its own, sipped from mugs, but is also a great bowl soup for toppings.  I like some lightly toasted, but not browned, croutons.  Thinly slice some peeled parsnips and fry them until crispy to make chips to float on the top.  Crumbled, crispy smoky bacon is a wonderful addition, and a drizzle of fruity olive oil can add a touch of luxury.  A little shower of chopped fennel fronds add freshness and a spot of green.

Use a light colored chicken broth, one that is too dark will give the soup a muddy color.

Peel the parsnips and trim off the stem end.  Cut into evenly sized chunks.  You should have 1 pound trimmed parsnips. Remove the stalks from the fennel bulbs, quarter them and cut out the tough core.  Rinse the bulbs under cold water, making sure there is no dirt between the layers. Cut into chunks roughly equivalent the parsnips.  Trim the leeks, discarding all but the white and palest green parts.  Slice each leek in half and run under cold water, fanning out the layers to remove any dirt.  Cut into chunks the size of the other vegetables.

Place all the vegetables in a 5-quart oven-safe Dutch oven.  Add the chicken broth and bring to a boil over medium high heat.  Cover the pot and move it to the oven.  Leave the soup in the oven for 3 hours until the vegetables are completely soft.

Remove the pot from the oven, uncover and leave to cool slightly.  Using an immersion blender, or very carefully on batches in a blender, blend the soup until smooth.  Add the milk and blend until completely smooth. Taste and add salt if needed.  Reheat the soup, but do not boil, and serve.

The soup can be made ahead and gently reheated.  Add a bit more milk to thin it out if needed.