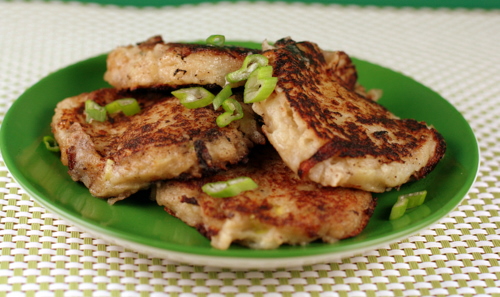 There was a pub I frequented when I was a graduate student in England.  I will admit I didn’t eat there as much as my friends and I took a study break for last call at the bar. But they did serve food.  It wasn’t gourmet, it wasn’t even all that great, but they did have these potato cakes that I was very fond of.  They were cheap and filling, which are two of the top criteria for any student’s good food list.  It was only many years later, when I concerned myself primarily in recipe reading and research, that I came across boxty, and realized it was the same dish I’d eaten those years ago. I’ve since searched them out at pubs that do specialize in good food, and found the principle was pretty much the same.

My research revealed that boxty (pronounced bach-shtee) is a classic Irish dish.  A potato cake made with mashed and grated potatoes, often using leftover mash and that last potato in the drawer.  I follow the traditional method I’ve read in recipes over the years, but I add the bite of green onions, as is traditional in Champ, the classic Irish mashed potato dish.  And, as usual, I prefer the tang of buttermilk. Boxty aren’t pretty, but they are tasty.  The creamy mashed potatoes with the texture of the grated potatoes sets them apart from most other versions of potato cake.  I honestly can’t remember how they were served at that pub, but I have since had them as part of a “full English (or Irish)” breakfast, with bacon, sausage, tomatoes and egg all fried in the same pan.  I love them with a good pat of butter melting on top, but they make an excellent side dish, and would be brilliant with corned beef and cabbage or soaking up the gravy from a stew.

Heat the oven to 200° and line a baking sheet with paper towels.

Peel two of the potatoes and cut large pieces.  Place the chunks in a large saucepan, salt generously, and cover with cold water by 1 inch. Bring to a boil over high heat and cook the potatoes uncovered until fork tender, about 10 minutes.  Halfway through the cooking time, drop in the chopped green onions.  When the potatoes are soft, strain them through a colander and return to the pan.  Mash them with ¼ cup of the buttermilk until they are smooth.  Set aside to cool slightly.

While the potatoes are cooling, peel and grate the remaining potatoes on the large holes of a box grater. Toss with 1/4 teaspoon of the salt and place on a clean teal towel.  Gather the towel into a ball and squeeze out as much moisture from the grated potatoes as possible.

Beat the remaining ½ cup of buttermilk and the egg together in the measuring jug.  Fold the grated potatoes into the mashed potatoes and green onions.  Fold in the buttermilk mixture, flour, and salt until incorporated. You should have a pretty stiff batter.  You can add a bit more flour if needed.

Heat a large nonstick frying pan or griddle over medium heat.  Add enough butter to lightly coat the bottom when melted. Drop 3 mounds (about 1/4 cup each) of the batter into the pan and flatten each to about 1/4 inch thick. Cook until the pancake bottoms are golden brown, about 4 to 5 minutes. Flip and cook the other side until golden brown, about 4 to 5 minutes more. Place on a baking sheet and set in the oven to keep warm. Repeat with the remaining butter and batter. Serve warm.