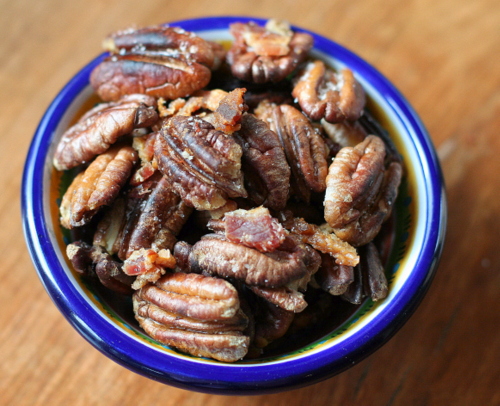 I don’t know who makes these decisions, but there is an endless list of “National Days” celebrating foods, dishes and ingredients.  I recently saw that it was National Pecan Month, so I thought I better pull out a preparation for the iconic Southern nut.  These are a salty, crunchy snack for the bar, or on top of a salad, and once again prove that everything is better with bacon.

Let the bacon grease cool, then reheat it for frying.  The nuts burn quickly and reheating allows more control over the temperature.

Cook the bacon in a skillet until crispy.  Drain the bacon on paper towels, then transfer the bacon grease to a medium sized skillet and let cool.

Use a sturdy knife to chop 6 strips of bacon.  Save the rest of the bacon for another use.

Have a plate lined with paper towels ready by the stove. Reheat the bacon grease over medium heat until a drop of water sizzles, but do not let it smoke.  Drop a handful of pecans into the hot fat and stir around.  Remove with a slotted spoon to the prepared plate after about 15 seconds.  Just let the pecans turn a shade darker, watch carefully and do not let them burn.  Immediately sprinkle the hot pecans with salt.  Continue with the remaining pecans.  If the fat starts to smoke, remove from the heat for a few seconds to cool down.

When the pecans are cool, toss them with the chopped bacon and serve in a big bowl.