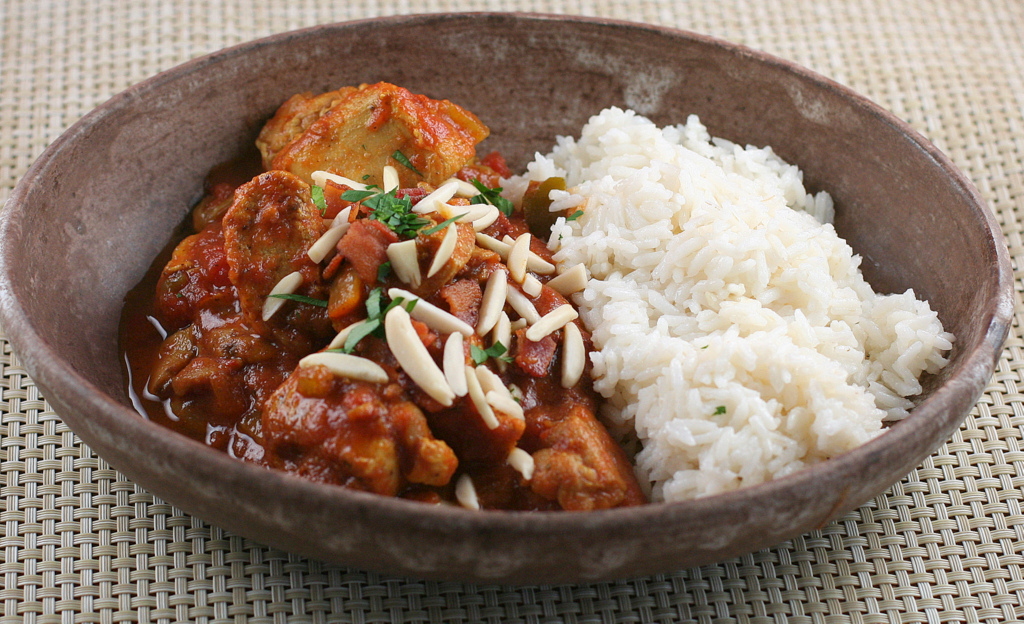 Country Captain is an old Low Country dish that dates from the days when Charleston and Savannah were important stops on the spice route, and the British influence on trade with India held sway. Early dishes from the Southern repertoire include lots of interesting spices, and the older the recipe, the more exotic it may seem. Recipes for Country Captain appear in all sorts of Southern community cook books, the same concept with slight variations from cook to cook. It is served at fine restaurants and fine homes, was a favorite of FDR and General Patton and because of that, made its way into the Army’s meals-ready-to-eat program. It has the best qualities of a Southern recipe: ancient tradition, a storied history, the special touches of generations of cooks – all with a contemporary feel in any decade.

Almost every recipe for Country Captain I have read or eaten uses bone-in, skin on chicken pieces, or just a quartered chicken. But I find that awkward to eat, and you really don’t get enough of the deep, spiced sauce for my liking. So I altered my recipe to be more like a chicken stew, with hearty chunks of boneless thighs and breast. I’ve upped the spice factor too and added a little sweet sophistication with a dash of Madeira (a very popular tipple at the time this dish was born). Country Captain is generally served with rice, once a staple grown in the Low Country, but I say why go plain when you can boost the flavor with some coconut.

Serves 4
Save Recipe
Print
For the Country Captain
For the Coconut Rice
Instructions
For the Rice
The Runaway Spoon https://therunawayspoon.com/