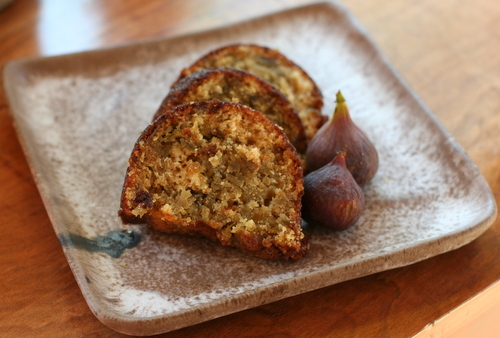 A friend recently posted on Facebook that she had some figs lying around and was looking for suggestions on how to use them.  Almost all the comments involved wrapping them with bacon, drizzling them with honey, or slicing them on a pizza.  All of which are delicious suggestions, but a little one-note.  But it got me thinking about the many uses of figs.  When I see them for the first time at the farmers market each season, I scoop them up and rush home to make Fig, Bourbon and Vanilla Bean Jam.  I usually make another batch the next week.  I have already done that this year, and the fig conundrum reminded me of a recipe I hadn’t looked at in years.  It is from a very old community cookbook, missing its cover or I’d tell you which one, with handwritten pages that have been mimeographed and bound.  It lists the ingredients, and has the directions “Mash figs, mix together, bake.”

I first used this recipe when I started to see figs on offer around here, but put it away when I moved on to jam.  I will admit, the first fig I ever ate was in Europe.  Other than fig preserves, I had never seen figs in stores here.  They are very delicate and don’t store or ship well, I am told, so for most Southerners, figs were mainly the province of those lucky ones who had a tree growing in the backyard.  That is where I imagine the original recipe came from.  Someone with an overabundance of figs, looking for a way to use them up.  But that has all changed with the advent of active farmers markets.  Figs are readily available and so fresh and delicious; it is a shame not to use them in as many ways possible.  Of course, if you have a fig tree in your yard, give me a call.

I have added an equally old fashioned boiled buttermilk glaze to this cake, to add another rich dimension.  Leave it unglazed and it is a delicious breakfast treat, but I urge you to try this glaze at least once.  It is truly a glaze that soaks into the cake, rather than a frosting and I think it just adds to the old-fashioned charm of this treat.

Preheat the oven to 350°.  Grease a Bundt or tube pan well. (I like to use a baking spray like Baker’s Joy).

Snip the stems off the figs and place them in the bowl of a food processor.  Process the figs to a chunky puree.  Do not blend until smooth, you want some small chunks of fig in the mix.  You should end up with 2 cups of puree.  If you don’t have a food processor, use two forks and some elbow grease and mash the figs up well.

Whisk the eggs in a small bowl to break up the yolks, then add the oil, sugar and vanilla and blend until smooth.  Add the flour, baking soda and cinnamon, switch to a sturdy spatula and mix everything together.  Add the figs and fold until thoroughly combined and no traces of flour are showing.  Spread the mixture into the prepared pan and bake for 40 – 50 minutes until a tester inserted in the center comes out clean.  About half way through the baking time, loosely cover the pan with foil.

Cool the cake in the pan for 10 minutes, then run a thin knife around the sides to loosen the edges.  Turn the cake out onto a wire rack placed over paper to catch drips (you can use the foil you covered the pan with).  Leave to cool for 10 minutes while you make the glaze.  Glaze the cake while it is still warm, but not piping hot.

Place the buttermilk, butter, sugar, corn syrup and baking soda in saucepan and bring to a boil over medium heat stirring constantly. It will be white and fluffy.  Remove from the heat, stir in the vanilla and immediately brush the glaze over the cake with a pastry brush, covering the top and the sides.  The glaze will sink into the cake, it doesn’t harden like a frosting or a powdered sugar glaze.  If the glaze begins to separate and thin out, return it to the heat until it is fluffy again, then continue brushing.  Give the cake a good two layers of glaze, but you may have some leftover, which is fine.

Cool the cake completely and serve in big slices.  Cover tightly and store for up to a day.